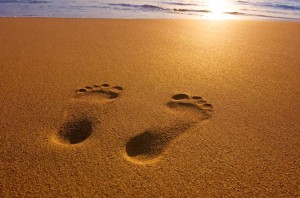 Footprints in the Sand

“One’s options in this world are as vast as the horizon, which is technically a circle and thus infinitely broad. Yet we must choose each step we take with utmost caution, for the footprints we leave behind are as important as the path we will follow. They’re part of the same journey — our story.”
― Lori R. Lopez

“I think that’s what we all want, in the end.
To know that we left footprints when we passed by, however briefly.
We want to be remembered.
So remember us.
Please.
Remember us.”
― Mike A. Lancaster

Your way was through the sea,

your path through the great waters;

yet your footprints were unseen. 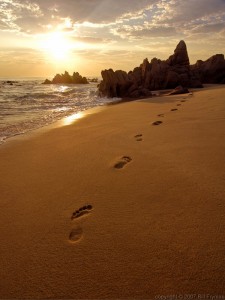 Some footprints are long lasting.  Those are the kind of footprints that people should be striving to achieve.  The home we currently live in is an older one, but it is special because it’s the first home we’ve owned.  The subdivision where our home resides was developed in the mid to late 1970’s, making our home nearly 40 years old.  Besides having a wide and inviting front porch to relax on, the hominess of this house beckoned us to it when we first found it four years ago.  In a way, our home is unique because we purchased it from the original owners who had it built many years ago.  Although the house had sat empty for quite some time when we first looked at it, there was a sense of love and belonging that permeated the walls, and we could feel it when we first walked in the door.  In fact, when we first looked at the home, I almost imagined that I could hear the voices of the family who lived, loved, and laughed in the home for more than 32 years before we bought it.  It was a house that was well loved and continues to be loved by us. 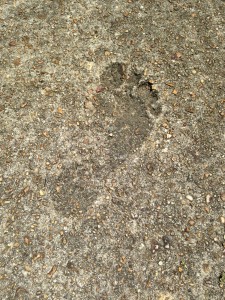 Footprint in the sidewalk on the side of my house

When the neighborhood was developed, sidewalks were planned and built up and down every street in the neighborhood for pedestrians to use.  One can travel to any part of the neighborhood using these sidewalks.  On the side of our home facing the driveway, we noticed that there were tiny little footprints of a long gone child permanently embedded into the sidewalk.  My wife and I thought that these footprints were just about the coolest thing we’d ever seen, and I often found myself wondering how these footprints had come to be in the sidewalk, and who had made them.  Two of my neighbors directly across the street have been here since the neighborhood’s inception in the 1970’s.  One day I happened to be outside when one of my neighbors was walking her dog, and I just so happened to think about asking her if she knew the story of the footprints.  She indeed knew how the footprints came to be and proceeded to tell me the story of a little boy who had grown up in the neighborhood many years before. This little boy apparently lived in the house next to mine when they were pouring the sidewalk.  She told me that before anyone could stop him, he pulled his shoes off and walked through the freshly poured cement, forever immortalizing the prints of his tiny feet.  My guess is that they either didn’t catch the fruits of his labor before the cement dried, or they thought it was cute and left it as it was.  I suppose his mother was not amused at all on that day many years ago to find out that her child had cement all over his feet.  The footprints don’t go far.  They actually start a short distance up from my house and then terminate almost directly in front of my driveway.  But they’re still there nearly 40 years later, and tell the journey of a small boy who one day took a walk down the sidewalk.

Even though the mystery of the footprints has been solved, I have often wondered about that little boy.  Where did he go when he moved, and whatever ended up happening to him?  What did he grow up to become?  Does he remember the footprints he once left in my sidewalk, and has he ever returned to see them?  You see, whether he knew it or not, he was destined to leave permanent footprints on that fateful day when he decided to go for a stroll in the freshly poured cement of the sidewalk.  These are footprints that can still clearly be seen nearly 40 years later, and they cause people to stop and ponder where they came from.

The evanescence of footprints left in the sand pose a stark contrast to the enduring footprints of those left in stone.  In our lives, we leave many footprints.  Everywhere we go we leave footprints.  These footprints tell the journey from whence we have come and to whither we go.  They tell the story of what we have done and of what we have achieved.  We also leave footprints in the lives of people.  In the scope of eternity, our time here on earth amounts to the mere blink of an eye.  But like the footprints left by the child in the newly built sidewalk many years ago, the foot prints we leave in the lives of people should be long lasting.  After you have left your footprints behind, you may never return to see them again.  If you have left footprints that are indelible, they will no doubt be felt and seen by many for generations to come.

In conclusion, life is too short for us to be concerned with those things that are of transient nature.  Whether it is the relationships that you form with others, or the things that you choose to occupy your time with, let your mark be seen and felt.  In my own life, I am grateful for those who have invested in me and left permanent footprints in my life.  Some of them are no longer here, but their footprints continue to be seen and felt by me.  May your footprints be forever and a day, and may they leave a lasting mark in the lives of all those you will meet.

“Some people come into our lives and quickly go. Some people move our souls to dance. They awaken us to a new understanding with the passing whisper of their wisdom. Some people make the sky more beautiful to gaze upon. They stay in our lives for awhile, leave footprints on our hearts, and we are never, ever the same.”
― Flavia Weedn

Much love and Godspeed,