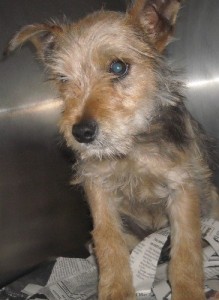 Opie at VWHS in February of 2009, right before we adopted him. This was the picture we saw on Petfinder.com

~ NOTE:  I have pecked at this post off and on for three days now and have finally finished it!  I will be featuring my other two dogs in later posts.  Life is a Journey…and it’s so much better when you have the company of a good dog! ~

The love of a good dog is something that can never be replaced…and can be understood only by those who have been privileged to have a good dog in their life at some point… I count myself among those who are privileged, as I currently have three dogs, each as unique and different as night and day.

Over the next few weeks, I will share with you the stories of each of the three dogs who currently live with us and occupy a part of our lives.  This week I am featuring “Opie.”

Opie is about 21 lbs. of lovable, huggable, cuddly, and at times, a VERY annoying dog!  We were told when we adopted him that he was part Schnauzer and something else.  Based on his coloring and our studies on crossbreeds, the “something else” is Yorkshire Terrier.  Either way, he has a lot of terrier in him and with that comes the inherently curious terrier personality. 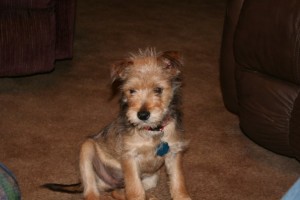 Opie during his first day at home with us – February 2009

Denise (my wife) claims that his full name is “Benjamin Opie Coleman,” since he definitely looks a lot of like the Benji dog of the 1970’s movies.  Opie has gone by a lot of nicknames over the years, including “P-Dog,” “Mr. P,” and “Opus.”  The story of how this dog came to be known as “Opie” is actually quite humorous.

Denise and I were married in December of 2007.  Our oldest dog, “Wiley,” was the dog of my late high school and college years.  When I moved into an apartment while in college, Wiley went to live with my parents and never returned to me until late 2012.  So, now fast forward to December of 2008, where we found ourselves relatively newlyweds who were childless and dog-less.  We started talking about possibly getting a dog around December of 2008. 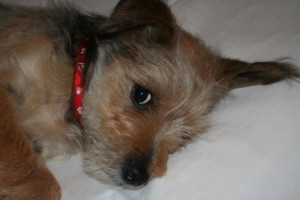 Opie shortly after coming home to live with us. Even at 4 months old, his larger than life personality was already showing.

Around February 2009, I started looking online for dogs at various animal shelters.  While I was in college, I worked part time for the then Forrest County Humane Society (now Southern Pines Animal Shelter) in Hattiesburg, MS.  My dog, Wiley, came from that shelter at 6 weeks old (more on that later).  I’ve seen it all: the good, bad, and ugly of shelter life.  I’ve seen the suffering of animals, and the great joy they have when they’re finally adopted.  I told Denise early on that any dog we would get would most definitely come from an animal shelter.  I would never pay to buy a dog from a breeder, or purchase an expensive puppy-mill dog that came from a store like Petsmart or Petco.  Besides costing mega bucks, those dogs usually have inbred genetic issues that plague them all of their life.

I discovered Petfinder.com while doing an online search for animal shelters in the Jackson, MS area.  This is  a wonderful site, and I encourage you to check out the thousands of animals available for adoption through this website.  Visit petfinder.com to possibly find your new best friend today!  You can easily search by state and choose from thousands of adoptable animals on this website.  Needless to say, Opie popped up in Vicksburg, MS at the Vicksburg Warren Humane Society.  I though that he was just about the cutest thing I’d ever seen in my life (see picture at the top…don’t you agree!), so I showed his picture to Denise and she gave me the OK to call and inquire about him.  And so I did.  I called…and called…and called, but never could seem to get them to answer the phone. Since Vicksburg is only 30 minutes from our home, I decided to drive over after work one day and visit the animal shelter in person late one Thursday afternoon before Denise came home from work.  When I arrived, I discovered that the puppy I’d come to see was indeed still available for adoption and looking for a good home.  When the lady took me back to his cage to introduce me, she warned me that he was very shy and didn’t take to strangers very well.  That may have been the case, but when he saw me, he attacked me and showered me with puppy kisses.  The lady just could not believe it and told me that he’d never acted like that with anyone.  We took him outside and let him run around and play a bit while I became acquainted with him.  I remember that it was a relatively warm sunny afternoon for a February.  Opie ran around and played, flopping on his back so I could rub his belly.  I fell head over heels in love with that puppy and decided at that moment to adopt him for my wife’s birthday on February 20, 2009.  My wife and I had already made plans to go out of town for the weekend to celebrate her birthday, so I went ahead and signed the papers and adopted him that Thursday with the understanding that I’d be returning immediately the following Monday to pick him up since we wouldn’t be able to take him with us out of town for the weekend.  Right before I left, I went to the back one more time to see the puppy again and tell him bye.  That’s when I discovered that he was a dog that liked to sulk.  Even at 4 months old, he had the sulking act down pat, and he turned his back to me in his cage as he refused to look at me.  He was clearly mad at me for not taking him home on that Thursday!  Even today, 5 years later, he’s still great at sulking when he gets upset. 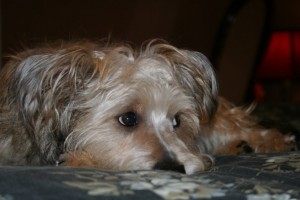 Opie in October 2009…he was one year old! This is the strong and handsome dog he matured into.

When we brought Opie home that following Monday, he didn’t have a name!  We’d spent the entire weekend thinking of possible dog names and couldn’t find that happy medium that we both agreed on.  After all, naming your first dog as a married couple is a monumental decision!  Dejectedly, we sat down to eat dinner that Monday evening as our new and nameless puppy sat and watched us.  We put the television on a re-run of the Andy Griffith show just in time to hear Andy say “come here Opie.”  We both looked at each other, then looked at the puppy who perked his ears up at the world “Opie.”  I looked at my wife, then looked at the puppy and said “well I think I know what your name is going to be!”  And so Opie it was.  There never was, and never will be another dog on this Earth like him.  Of my three boys (and any other previous dog in my life), Opie has the most expressive and human like personality of any dog I’ve ever met.  He never whines.  He talks.  He is persistent and super annoying at times, often getting what he wants!  He works that front paw and will pester you until you either pay him attention or give him what he wants.  But he is lovable, and he is as loyal as he can be.  He’s a real mama’s boy.  After all, he was Denise’s birthday present in February 2009! 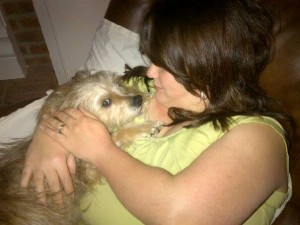 Opie and Denise in early 2014. He was her birthday present in 2009, and has become such a huge part of the family.

Opie has a larger than life personality.  He has brought so much excitement into our lives.  There simply is not enough time or room in this blog to describe his many antics or the many good times we’ve had with him.  He used to love to go to the park and play hide and go seek with us as a puppy.  He is shy and reserved around strangers, but is so loving and outgoing with family members.  He has traveled with us extensively, and been on so many adventures with us.  He’s grown with us, since he’s been around from the early days of our marriage.  He’s been with us in times of joy, and during times of intense sorrow.  He’s heard our laughter at his antics, and his fur has been wet with our tears as we’ve hugged him for comfort.  Of my three dogs, Opie can best be described as having an attitude of “joyful exuberance.”  Indeed, when I arrive home I can expect to be nearly knocked down and attacked by 21 lbs. of happy go lucky dog.  I have to immediately stop whatever I’m doing when I walk in the door and hug him and pet him or he will not stop bugging me to death until I do.  And if I do manage to offend him by not immediately telling him hi, he will slink off to nurse his hurt feelings until I pick him up and pay him attention.  Many who may read this blog may say well…it’s just a dog.  Not really.  He’s “Opie” and he’s seriously turned our lives into a roller coaster ride!  Life is never dull, or never lonely with a dog like Opie.  I hope the Lord blesses Opie, Denise, and I with many more years together, and we are extremely grateful for the fates that brought us three together.  After all, Opie does mean “Magnificent Masterpiece!”Until next time, Godspeed! 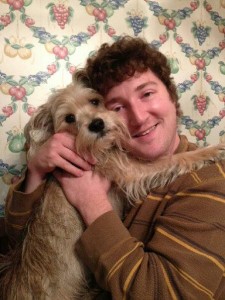 Stephen and Opie in December 2013. YES, he really does love to give hugs!! This picture captures the essence of Opie perfectly.