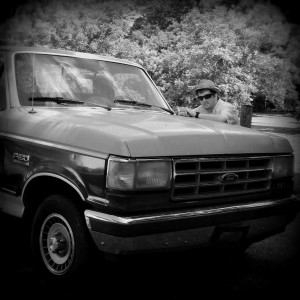 I know that it’s been awhile since I last updated this blog.  I haven’t really made that much progress on the book lately, and I have just been busy!  Sometimes life happens.  I had a few minutes this morning to blog, so I decided I would sit down and write an update.

I have included a picture at the top of “The Beast”, my 1988 Ford F150.  I finally got it out of my garage in May and got it going again.  It hadn’t run or been driven since last October, while I decided what I wanted to do with it.  I came awfully close to selling the truck, but I have a bond with that ugly old beast that I can’t explain!  The truck came into my life quite by chance in 2011, and I wasn’t really looking to purchase a truck at that time.  I am the second owner, and the first owner and his wife had it from 1988 – 2011.  The first owner was the father of my great-aunt’s best friend.  There’s a very sad story behind the family who owned the truck.  I guess we’re just kindred spirits, and every southern guy needs an ugly old Ford truck in his life!  It only has 97,000 miles and doesn’t get driven much.  It’s my truck for hauling the dogs to vet, or going to the lake to go canoeing or fishing.

Not many people seem to be reading this blog… but that’s ok.  This blog is more of an outlet for me to express my thoughts that sometimes become a train wreck inside my head.  It gives me an method to express what I’m thinking or feeling.  I look forward to completing the book at some point early next year!

The experiences we have in our lives mold us and shape us into who we are, but sometimes life deals us such a blow that it cracks us into pieces.  Recently, my wife and I were helping a relative move out of her house.  This relative had a little ceramic box that was made in the shape of a heart.  The lid of the box, which was in the shape of a heart, had been broken right through the middle.  The box obviously meant something to my relative, and I told her that I’d take it home and attempt to glue it back together with epoxy.  As I began to glue the heart shaped lid back together, I discovered that there was a tiny chip missing…lost…and never to be found again.  While the two halves went back together and look presentable from a distance, upon closer inspection you can clearly see that there’s a chip missing that will never be found or seen again.

Our lives are like this ceramic heart shaped lid.  Sometimes we suffer injurious cracks, and sometimes we’re shattered so bad that we can never be put together in once piece again.  We can take the pieces and attempt to glue them back together so that they’re even stronger than before, but there’s always going to be that scar…that chip that’s missing from us.

There’s a saying that I came across awhile back.  It goes like this:

“Life is not a journey to the grave with the intention of arriving safely in a pretty and well preserved body, but rather to skid in broadside, thoroughly used up, totally worn out, and loudly proclaiming, “Wow, what a ride!”

And so when we reach the end of our lives, we will no doubt arrive with chips, nicks, dents, and scratches.  The chips hurt…for awhile…and they remind us of the traumatic experience that cracked us in the first place.  But ultimately, the chips and cracks make us stronger and show the world that we are resilient and will survive this journey called “life.”  Until next time, Godspeed.